KLINGER CEO interview: 'We have many reasons to be proud!'

One year into the Covid-19 pandemic in sealing and fluid control industry. Interview with KLINGER Group CEOs Daniel Schibli and Christoph Klinger-Lohr


After one year of pandemic, do you remember when it began and how KLINGER changed during the course of it?

Daniel Schibli: To me the whole thing starts with the first pictures and news from Italy, which reached us at the end of February 2020. I thought: Something big is coming. Christoph (Ed: Klinger-Lohr) and I were already constantly on the phone. But we deliberately took time out to watch the news and gather information to get an idea of the situation, especially in those countries where we had subsidiaries and where we delivered to. Those breaks were important, because you need to stay calm in a crisis!

Christoph Klinger-Lohr: We called the managing directors of the different subsidiaries to get an overview of the situation. Our teams provided us with updates about the different policies in the countries and on travel restrictions. We still monitor them closely as we expect to stay with this routine for the whole of 2021.

How did you react to the information?

Christoph Klinger-Lohr: As the corporate management, we proceeded to determine future measures. KLINGER is organized in a very decentralized way. We have companies everywhere. Of course, we defined high-level goals and measures and kept talking to the teams in the subsidiaries.

Daniel Schibli: The economic and psychological shock that rippled across the world in March definitely altered our course. We were confronted with very different circumstances in the various countries that have KLINGER subsidiaries. Spain and the UK for example were hit especially hard. In each country, there were and still are different state support measures for companies. And of course, the effect of the crisis also depended on the industry. The shipping industry traditionally reacts very sensitively to economic changes and we had to act quickly, because it is also an important purchaser of our products. At the same time, just like the oil, gas and chemical industries, it is subject to rules that legally demand maintenance work. Some orders were therefore delayed, though they were not canceled.

Christoph Klinger-Lohr: As an essential supplier of goods and services to critical infrastructure industries, we also maintained the supply chain to our customers throughout and without disruption. 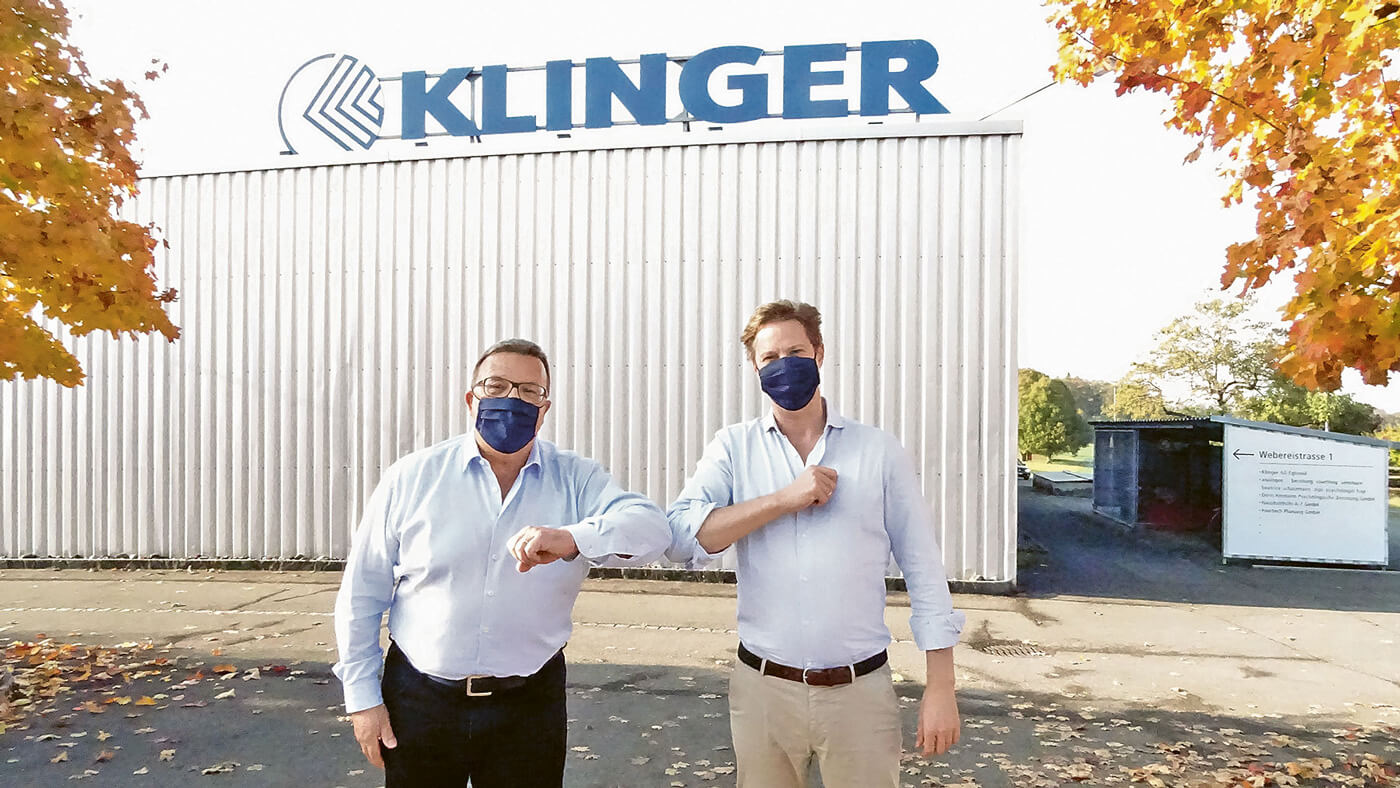 And talking about "critical infrastructure": KLINGER products are also needed for the energy and water supply, right?

Daniel Schibli: I will give you a concrete example: We have two companies in Italy and one large organization in Spain. These countries were European hotspots at the beginning of the pandemic. We immediately requested that the companies would be allowed to stay open because we supply critical infrastructure. In Italy for example, it was gaskets and valves for oxygen producers. The oxygen was needed to treat intensive care patients. Our Italian subsidiaries were only closed for a few days and they were then able to deliver again. We were always there. Reliably.

Christoph Klinger-Lohr: Luckily, we at KLINGER had only a few COVID cases! The operation was therefore able to keep going with almost no bottlenecks. With overseas suppliers, we immediately made sure that the supply chains were secure. The fact that we had always fostered these relationships during the good times paid off here.

And how have customer relations changed?

Daniel Schibli: We want to lead the way and ideally also inspire our customers. We attend online trade shows and conferences, where we network with suppliers and distributors. We also very quickly switched from "live" to online training and our employees quickly adapted to virtual meetings. It was our South African subsidiaries who played a pioneering role in this. But in the end, all subsidiaries went through similar changes in order to stay on the ball.

After one year Corona pandemic, how do you sum it all up?

Christoph Klinger-Lohr: Despite all the obstacles, we accomplished many things. We were able to keep an almost stable turnover in 2020 and again generated a good result. Especially now, during the pandemic, we have many reasons to be proud: We were able to hold on to our employees and even took on several new key employees, we managed to keep the supply chains stable and, most importantly, we were able to deliver to our customers at all times without disruption! We keep things flowing.

One Group – One Brand. United under the KLINGER brand umbrella

The KLINGER brand name stems from our founder, Richard Klinger. 130 years later, we are still managed by the same family: proof of our stability in the market

Management of the KLINGER Group

At KLINGER we understand that providing excellent service is about more than simply getting the job done. Meet the CEOs Daniel Schibli, Christoph Klinger-Lohr and Peter Müller.

160 years of KLINGER DNA: Technological change as a chance