Power-to-X: Green Hydrogen is the energy source of the future

KLINGER expert, Norbert Weimer, knows how hydrogen power can help the fight against climate change. In our fact check, he also explains which sealing solutions KLINGER has in store for the hydrogen market.

„Only with green hydrogen power will we be able to master the necessary energy shift. Hydrogen is the oil of the future!“

This is the development that Norbert Weimer, Manager of KLINGER Germany, is convinced of. And he is not the only one: many scientists, politicians and economy experts worldwide predict a shift towards green energy with hydrogen being the key technology.

The Austrian chancellor, Sebastian Kurz, wants to make Austria a "Hydrogen Nation". And also in Germany, a national hydrogen strategy is making way for the large-scale implementation of this medium. 150 similar projects are being funded throughout Europe, and for the first time, China also included the advancement of hydrogen in their national development plan in 2020. As a result of this, hydrogen filling stations are now government-funded in China. The market prices of hydrogen shares are rising accordingly and even Covid-19 has not affected them negatively.

Norbert Weimer is manager of KLINGER GmbH in Germany. KLINGER GmbH is a member of the task force Power-to-X for Applications, founded in 2018 by the Association of the German Mechanical Engineering Industry. Corporations such as Siemens, MAN and Thyssen Krupp are also members.

Power-to-X: Using green electricity when and where it is needed

So – what are the advantages of hydrogen? Why the hype? The strong point is its versatility. Compared to electricity, it can be stored more easily. This is why hydrogen is the ideal carrier medium to store seasonal overage from wind, water or solar energy that can later be used as an energy source or as a resource for industrial processes. This transfer of carbon-neutral energy is called "Power-to-X" (P2X) by experts.

When green electricity is converted to other energy sources, P2X makes it possible for electricity to be used independently from such sources as wall sockets, for example to power vehicles, planes and ships. Experts talk about "sector coupling", when the power requirement of various sectors is coupled via the medium hydrogen and its successor products.


This is how the flexible use of hydrogen could add to the energy transition. But, on the road to implementing this ambitious concept, a few challenges are waiting. Primarily, the infrastructure required to transport large amounts of this very fleeting and extremely light gas is still missing. Presently, work is being carried out to discover how to transport hydrogen, as an additive to petroleum gas, through the gas pipelines in order to reduce the CO2 during burning.

If green hydrogen is produced in countries with a lot of solar and wind energy, it can be transformed there into methanol or e-fuels, such as gasoline, kerosine and diesel, and then be transported in a conventional way. This, for example, would be one possibility for making air travel climate neutral. Sector coupling is therefore a global task.

Hydrogen is a molecular gas with the chemical notation H2. On Earth, it is bound in water and is therefore part of almost every organic compound. Water is formed when hydrogen reacts with oxygen and because the reaction is exothermic (producing heat), energy is a by-product.

Just like electricity, hydrogen is not a primary energy source that can simply be mined and used. Hydrogen has to be produced, requiring a certain amount of energy input. Depending on the energy source, hydrogen is classified on a colored scale.

Gray hydrogen → is obtained using fossil fuels such as petroleum gas or coal. CO2 subsequently goes into the atmosphere and adds to the greenhouse effect. Example: When producing one ton of hydrogen, around ten tons of carbon dioxide are released. This is currently still the most common method of production.

Blue hydrogen → is gray hydrogen whose CO2 is separated and stored during production (Carbon Capture and Storage, CCS). It is stored in underground hollows or, as raw material, processed further in the chemical industry. During this process of hydrogen production CO2 does not rise into the atmosphere and therefore it can be seen as CO2–neutral.

Turquoise hydrogen → is a by-product of the thermal decomposition of methane. A pre-condition for its CO2–neutrality is that the necessary high-temperature reactor is fueled with renewable energy and that, instead of CO2, solid carbon is produced.

Green hydrogen → is produced with 100 percent renewable electricity and therefore is truly CO2–neutral.

Hydrogen is only truly green when the electricity that is used for its production is also green. If fossil fuels such as petroleum gas or coal are used, CO2 is still released during synthesis. If the energy necessary for hydrogen production is green, hydrogen can be used as a fully CO2–neutral energy carrier medium.

KLINGER products make the transport, storage and further processing of hydrogen safe. With elastomere, PTFE and fiber-reinfored gaskets made by KLINGER it is possible to keep the connections of constructional elements leak tight and impermeable, even for the extremely small molecules of hydrogen (see expert’s check with Norbert Weimer).

Of course, all gasket types are sufficiently tested and inspected by the Technical Control Board, because leak tightness is essential when handling hydrogen. After all, it can ignite within seconds when coming into contact with oxygen and a spark (see Oxyhydrogen). To avoid this possibility, the highest standards of quality and safety are called for: "KLINGER has the expertise for accompanying and implementing the new P2X technologies with the suitable sealing technology," Weimer says.

All KLINGER gaskets have been tested by TÜV for their leakage behavior with regards to hydrogen and are recognized as particularly high-quality seals.

TÜV stands for Technischen Überwachungsverein (Technical Monitoring Association). It is one of the largest testing organizations in Germany for carrying out security checks, mostly as prescribed by state laws and regulations.

...that already in the 19th century, the French author Jules Verne foresaw the energy of hydrogen? In his novel "The Mysterious Island" (published in 1874) he wrote: "I am convinced that water will one day be used as fuel, that its components hydrogen and oxygen will become the source of heat and light. Water is the coal of the future!"

Offer for industry and technological trade

The products for cutters and the technological trade are already available (see the KLINGER product catalogue for P2X). Additionally, KLINGER's experts, such as Weimer, are looking forward to applying their know-how in direct conversation with customers: "The close cooperation along the whole distribution channel, from producer via the cutter to the plant manufacturer and operator, guarantees safe, efficient and durable sealing solutions in the hydrogen industry." 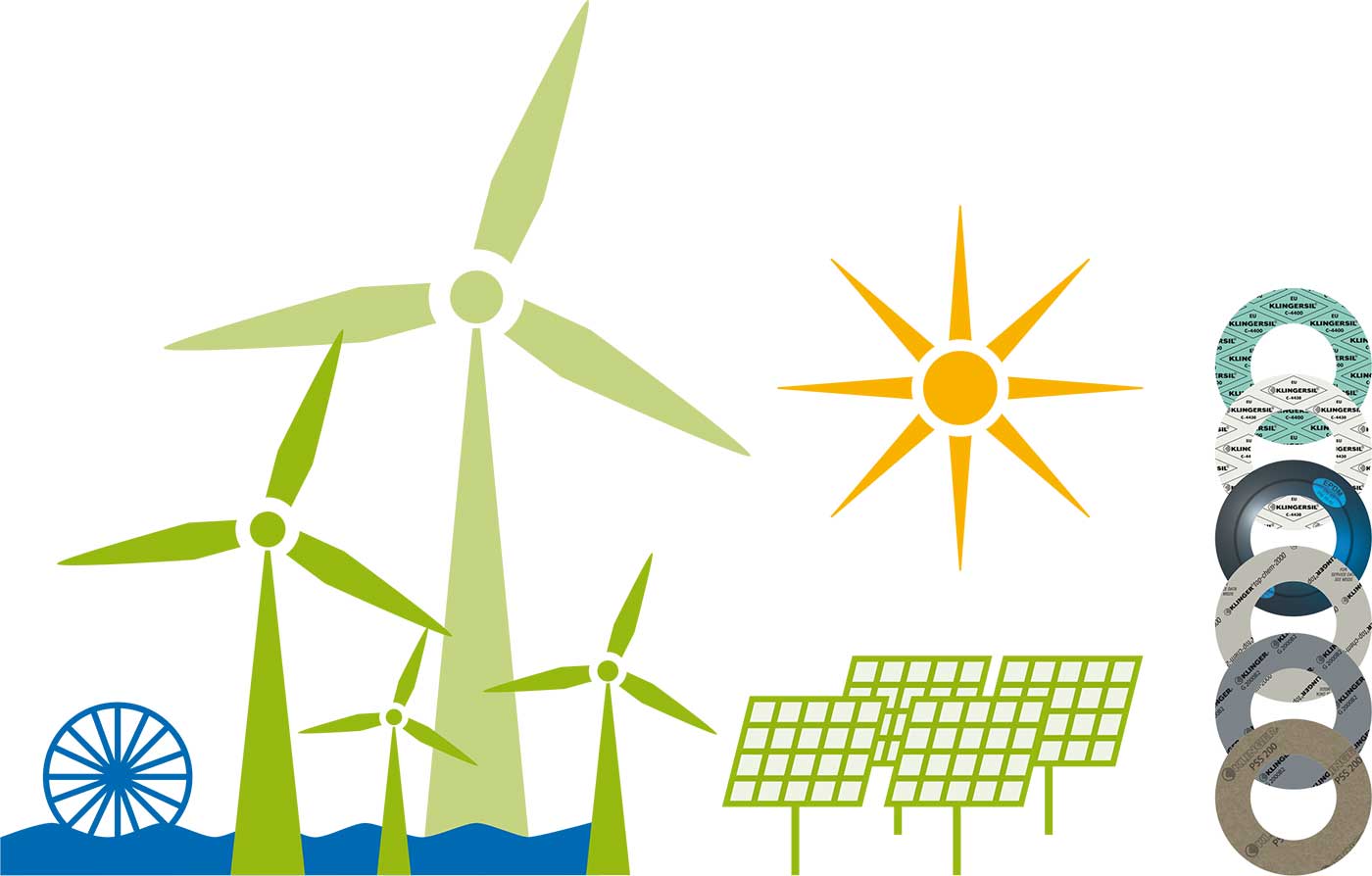 Gaskets for steam and water turbines with inlet and outlet lines and as corrosion protection between tower segments of wind turbines. 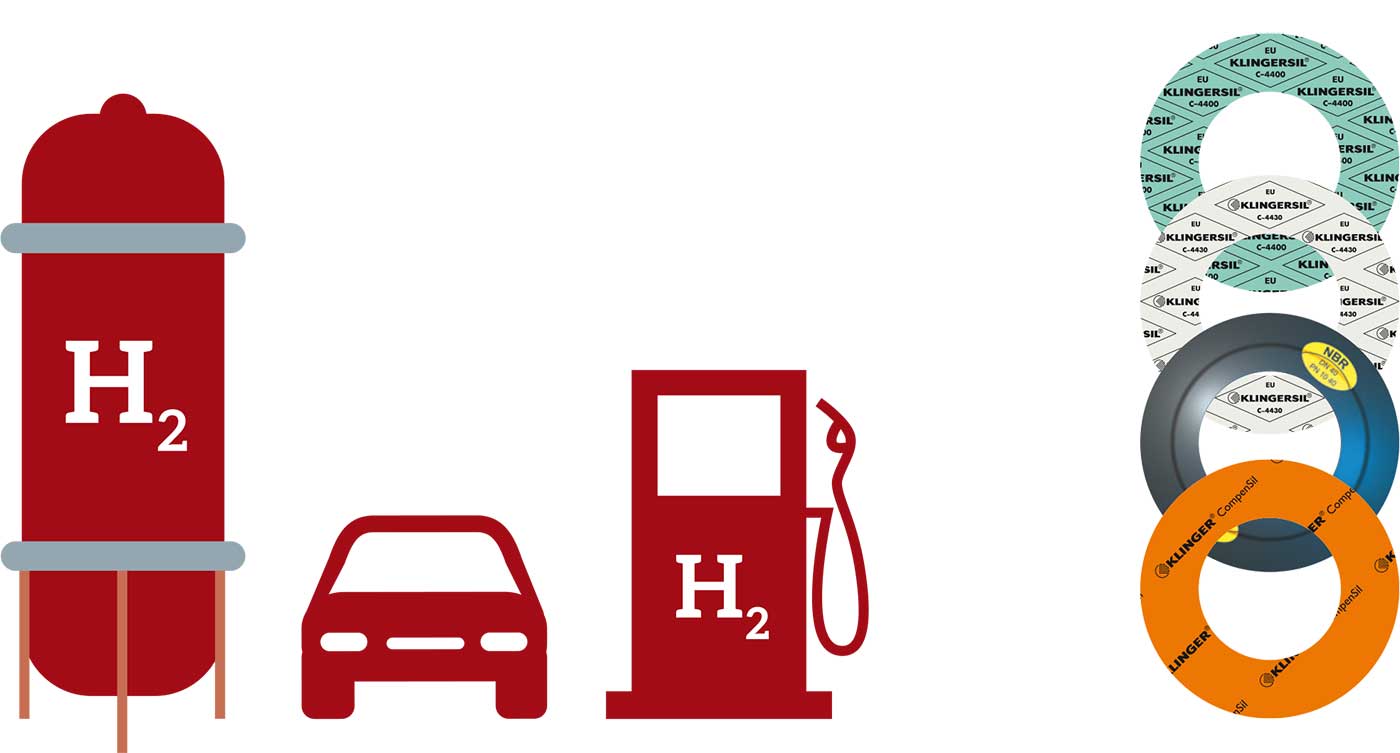 Gaskets for tanks and pipeline networks and for systems to store gas in caverns for gaseous and liquid physical states.
TA-Luft compliant

Generation of methane, methanol and long-chain hydrocarbons.
Conversion processes in reactors with the help of catalysts and gas cleaning systems.
Gaskets adapted to process and temperature. 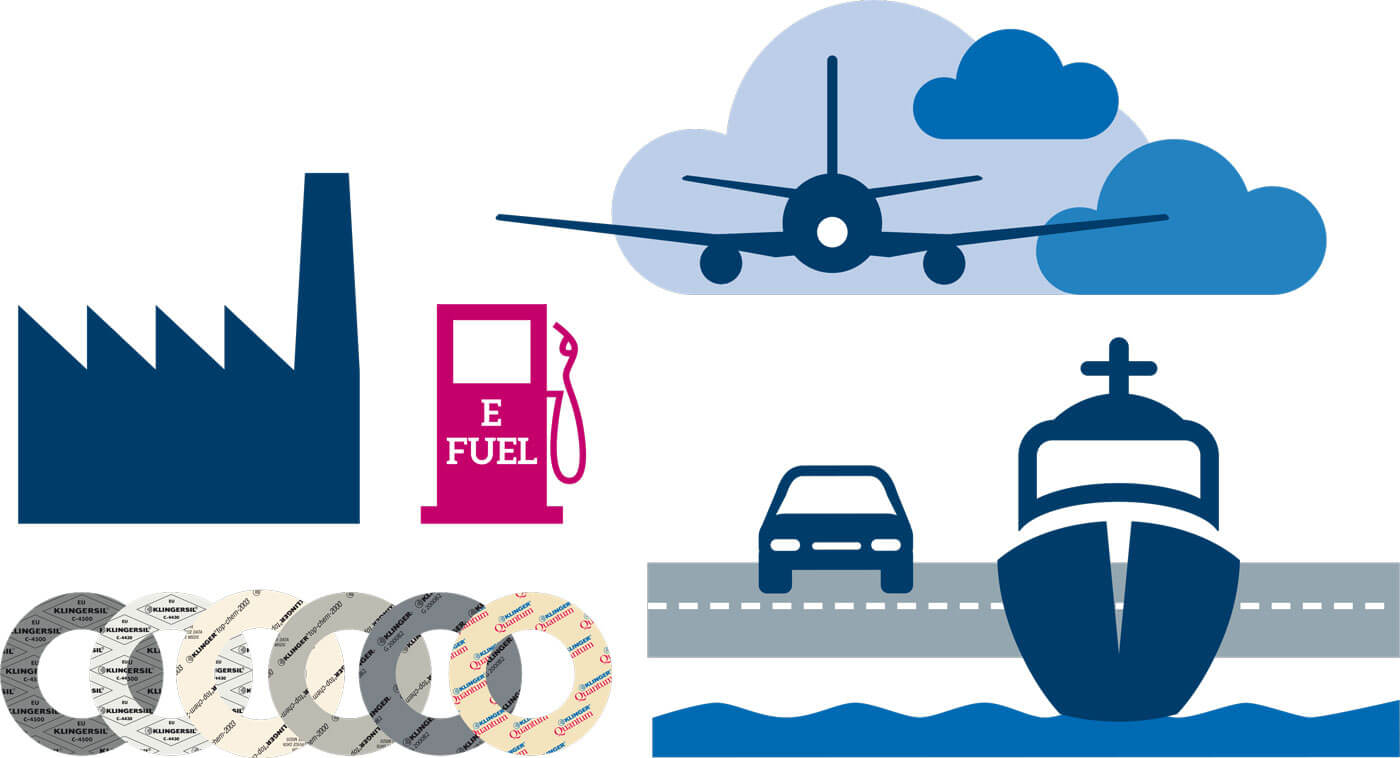 There are various processes for producing e-fuels (Fischer-Tropsch, Sasol, etc.) that are operated using catalysts in the medium to high temperature range.


KLINGER gaskets and their application spectrum for hydrogen and P2X-steps:

With standard flange connections and rather low temperatures for gas supply, distribution and storage. The Institute for Gas and Environmental Technology (DBI GUT) and the Technical Control Board (TÜV Süd) positively examined and certified hydrogen as a storage medium.

For high temperatures in the plant, e.g. above 200°C. Anywhere, where hydrogen is converted into e-fuels (gasoline, kerosine, diesel) and the process includes liquid phases.

Used in gas distribution, in machines and plants such as electrolyzers and process engineering plants, as well as in pumps. They also come outside of standard sizes - the advantage: fiber-reinforced gaskets can be produced as flat gaskets in every size and shape. They are also certified for use with hydrogen by the Institute for Gas and Environmental Technology (DBI GUT) and the Technical Control Board (TÜV).

Gaskets on the basis of PTFE

These sealing materials by KLINGER are suitable for all steps of the P2X process up to temperatures of 250°C. They are characterized by high chemical stability and high leakage integrity with gas and they do not deteriorate with use. Again, they are certified for use with hydrogen by the Technical Control Board (TÜV).