As an international Group with companies spanning the globe, KLINGER more than understands the necessity of customer proximity in order to successfully provide plant safety. KLINGER South Africa, working for their customer Engen, has taken the most literal approach to being close to a customer – with excellent results.

Our story begins in August 2017. Brent Howell, one of KLINGER South Africa's technical sales representatives, was busy planning and preparing the stock requirements for the Engen refinery in Durban South. During various meetings with the refinery's personnel, he learned that the entire plant was scheduled for major refurbishment (shutdown) in March 2018. Seeing an opportunity to provide the customer with more service, Brent contacted his KLINGER colleagues to co-formulate a strategy.

Get to know KLINGER South Africa

Partnering with Aveng Grinaker LTA at the refinery, KLINGER South Africa was tasked to perform a sequence of jobs including flange machining, gasket installation as well as bolt torqueing and tensioning. As an add-on service, KLINGER South Africa's new mobile gasket production facility was placed on-site at the refinery during the entire duration of the shutdown, to accommodate large-diameter kammprofile manufacture and refurbishment as well as soft cut gasket manufacture. 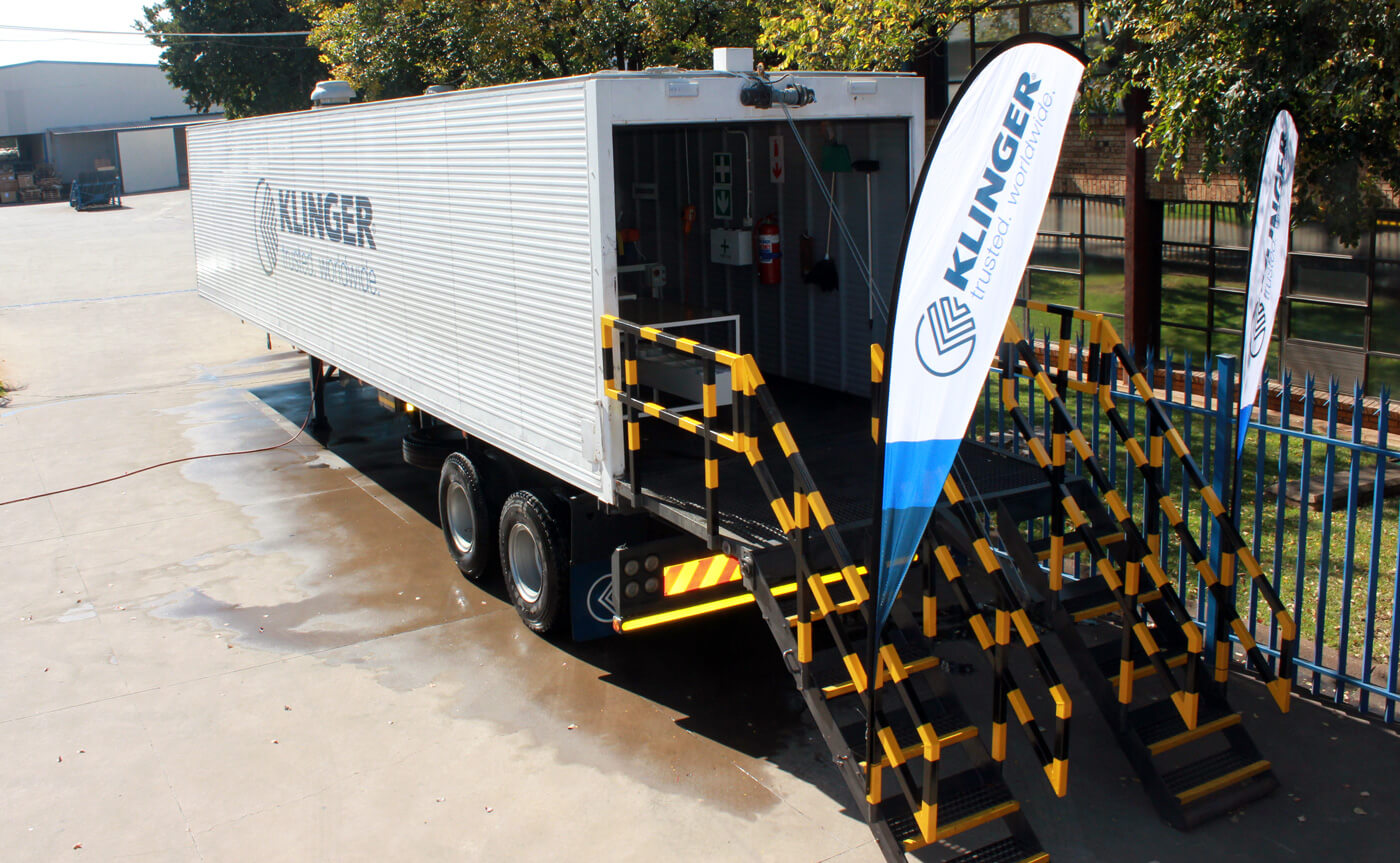 A major asset: the KLINGER mobile gasket production facility on the premises of Engen's refinery in Durban, South Africa

"In essence, this is a truck trailer with a length of 14 meters that we fitted with the necessary infrastructure to recondition and manufacture kammprofiles and to cut sheeting into gaskets – on the fly, so to speak," explains Phillip Herbst, Marketing and Sales Director of KLINGER South Africa. As work progressed, it became apparent that the shutdown project would require more gaskets than expected.

As a consequence, KLINGER was asked to provide support for the Refinery North section, contracted to SNC Lavalin (formerly Kentz). The trailer, originally an add-on, suddenly turned into a major asset over night. "The original plan was to have it available for emergencies and minor sealing material shortfalls," remembers Phillip, adding: "In order to cope with the volume suddenly required, we set up multiple shifts and were thus able to cut gaskets literally all day long. Having all the components on site saved a lot of time and allowed us to fully focus on getting the job done." 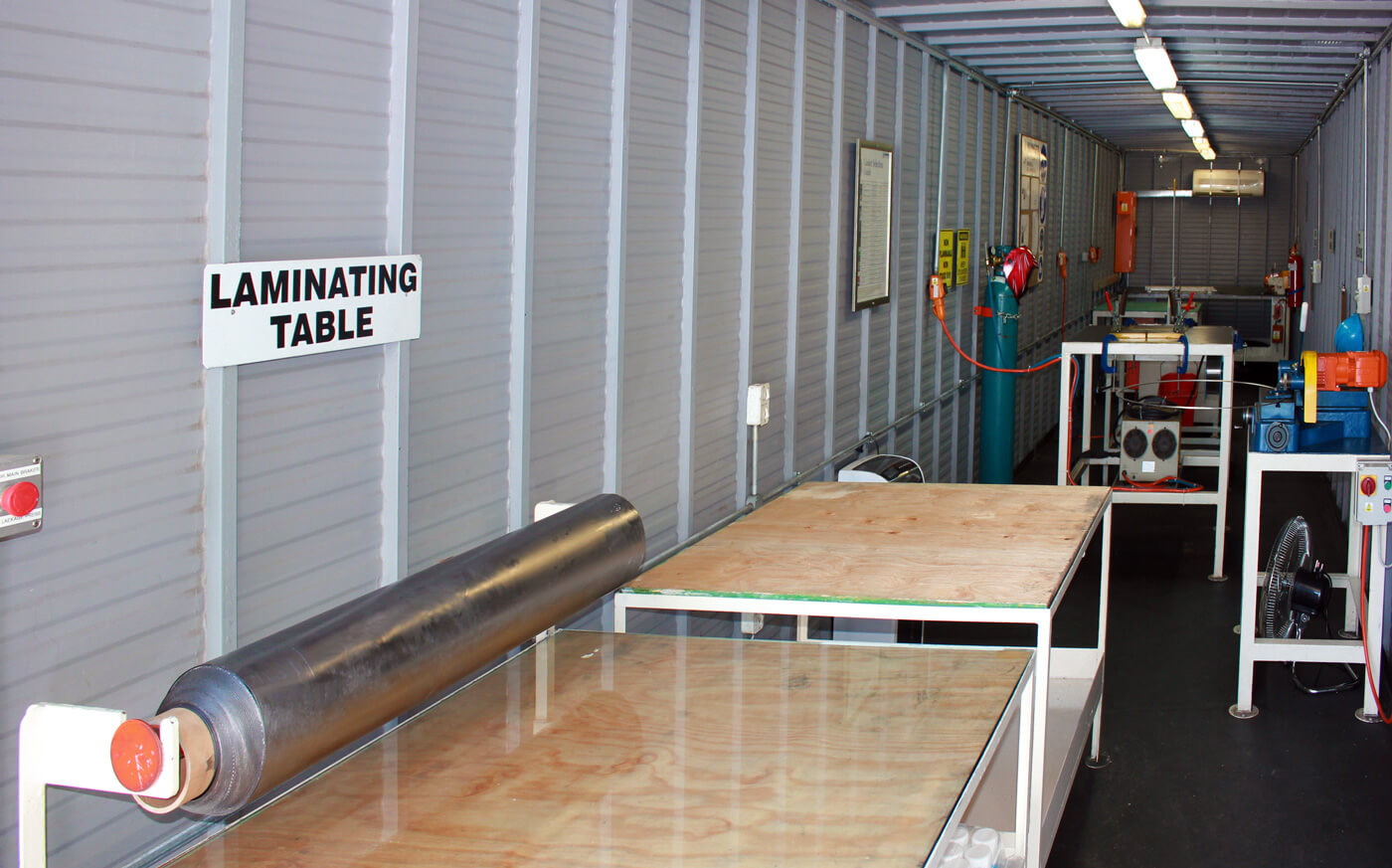 Ready to cut, manufacture and recondition on the fly: a look inside the fully equipped KLINGER trailer

Ultimately the shutdown, which was initiated on March 12 of this year, took more than the 35 planned days to complete. Thanks to KLINGER's power of innovation, flexibility and detailed knowledge of all matters pertaining to sealing technology, the efforts made for a true success. Phillip Herbst's innovation, the mobile gasket production facility had more than just passed its trial by fire. According to the management of Engen, it substantially contributed to the positive outcome.

"Having been originally brought on board for the Refinery South section, we had to quickly adapt to working across the entire refinery. Next to the tasks we had been contracted for, we had to focus on manufacturing significant gasket volumes and also had to troubleshoot leaks in the North section. As a result of the altered parameters, our colleagues were under constant pressure and worked around the clock," says Phillip, summarizing the project.

Asked about his thoughts on the outcome of the Engen project, he adds: "KLINGER's major efforts in the course of the shutdown project would not have been possible without the full support of our staff and our executive management. Most importantly, Engen is also well aware of this fact and has announced that they will continue to rely on our plant safety expertise for shutdowns and sealing technology-related services in the future."


Get to know KLINGER South Africa

Engen Petroleum Limited, formerly Mobil South Africa, was purchased by the Malaysian PETRONAS (which is still the majority shareholder today) in 1990 and subsequently rebranded into Engen. The company has three core business fields, which include refining crude oil, marketing primary refined products and the provision of convenience services via its around 1,450 service stations. It features operations in 17 countries, mostly in the African sub-Saharan region and on various Indian Ocean islands such as Mauritius, and exports its products to more than 30 additional countries. The refinery in Durban has a nominal capacity of approx. 120,000 barrels (19,000 m3) per day. Next to operating its own bulk carrier fleet, Engen is best known for having partnered with companies such as Woolworths, Wimpy, Debonairs Pizza, and Steers, who subsequently offer a selection of their products at various service stations.

Now On Board With KLINGER: Thomas Pipe Products In South Africa